A wealthy Republican Party operative pushing to put environmental policies on the conservative agenda is working behind the scenes in Charleston to build political and financial support for a seawall along the western edge of the peninsula.

Jay Faison is a Charlotte investor who runs a lobbying group and superPAC — both under the flagship name ClearPath — to influence conservative candidates and Republicans in Congress to support clean energy policies.

He’s among a wave of so-called “eco-conservatives” who want the GOP to recognize climate change as a real threat and support renewable energy, particularly nuclear power.

But Faison is not as well-known for his foray into local government.

He is an active board member and one of the main donors behind the American Flood Coalition, an advocacy and lobbying organization based in Washington, D.C., that’s focused on getting local and state officials to collaborate on flooding infrastructure projects.

It’s a 501(c)4 nonprofit, which means it can engage in political activity without disclosing its donors.

Over the past six months or so, Faison has met with South Carolina lawmakers, Mayor John Tecklenburg, city and county council members as well as local nonprofit leaders to discuss Charleston’s flooding issues and the possibility of building a flood barrier along Lockwood Drive.

The goal of the project, spelled out in a list of talking points the coalition circulated to state leaders, is to protect the city’s flood-prone medical district from storm surge brought on by hurricanes.

“It really came out as a place of such high risk, and really needed a lot more attention,” said Melissa Roberts, executive director of the coalition.

The organization also commissioned an engineering study to come up with a preliminary design of the barrier, which includes raised roads and earthen berms in some stretches. It would extend from the edge of the Low Battery seawall near the Coast Guard Station, to Brittlebank Park.

The city has had similar plans in mind for years, but other projects, including pricey drainage improvements for the medical district, have taken precedence. Currently, the city is working on rebuilding the Low Battery and elevating it to protect nearby streets and homes.

The coalition’s lobbying efforts could focus new attention on a potential Lockwood seawall and help it get built more quickly.

On Oct. 3, the coalition sent a letter to Gov. Henry McMaster asking him to request a share of federal disaster recovery dollars for the project, which it estimated could cost $150 million. It was signed by Tecklenburg, County Council Chairman Vic Rawl, the presidents of the three hospitals on the peninsula, U.S. Rep. Mark Sanford and State Rep. Katie Arrington, the Republican running for the 1st Congressional District. 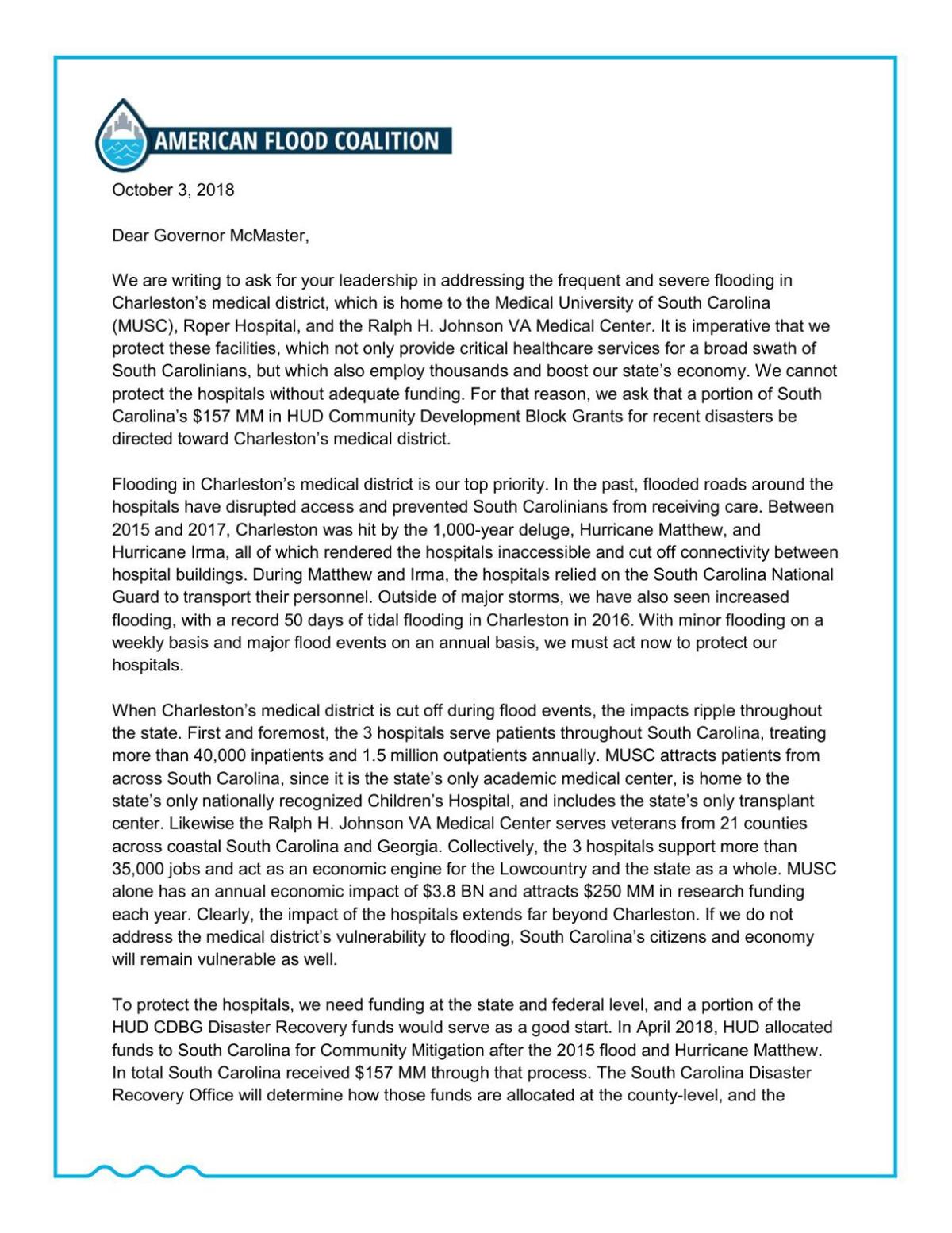 It’s unclear if the governor will have much sway. The targeted funding source is the $157 million recently allocated to South Carolina by the U.S. Department of Housing and Urban Development specifically for disaster-related mitigation projects.

J.R. Sanderson, program manager of the S.C. Disaster Recovery Office, said the funds can’t be split up for certain areas, at least not yet, because a study to determine the state’s priorities is not finished.

Regardless, the project will likely be an option the Army Corps of Engineers explores as it begins its $3 million flooding study of the peninsula. If the corps finds that a seawall is worth the investment, then the federal government likely will help pay for it.

“If the coalition can get us some funding to get it started that would be great,” Tecklenburg said, “but the Corps is going to truly vet this idea out.”

“It’s an example of … a lot of altruism on the part of Jay Faison,” said state Sen. Chip Campsen, R-Isle of Palms.

“He found very receptive Republicans in the Lowcountry that understand and believe what he believes in terms of environmental stewardship,” he said.

Arrington mentioned her involvement with the coalition during Wednesday’s televised debate with her opponent, Democrat Joe Cunningham. She has been calling for the seawall to protect the hospital district in recent months.

After being injured in a June car crash, Arrington appeared in a TV ad for a different flood-related organization called Fix Our Flooding, explaining that she could have died if flood waters had delayed first responders from getting her to the hospital.

The ad was taken off the air after Democrats complained that it violated campaign rules and gave her an unfair publicity boost. A Sullivan’s Island attorney has submitted a formal complaint to the Federal Election Commission.

Fix Our Flooding, which now has an inactive website, was an offshoot of the First Street Foundation, a tech startup in Brooklyn that puts out interactive maps to help people visualize how sea level rise could affect them. Its products are Sealevelrise.org and FloodIQ.

The enterprise is run by Matthew Eby, who was also the founder of the American Flood Coalition, originally called the Seawall Coalition.

Roberts, the new executive director of the coalition, said Eby is no longer involved in the organization.

Tecklenburg said Faison’s partisan interests don’t seem relevant to the issue the coalition is working on.

“I view a challenge of sea level rise and extreme weather and climate change to be totally nonpartisan,” he said. “I felt like maybe we needed some help on that side of the aisle.”

Almost half of the elected officials who have officially joined the coalition are from South Carolina, and they include Tecklenburg and McMaster, according to floodcoalition.org.

The organization has had success affecting flood-related policies in Miami and Norfolk, Va. It spent $400,000 on an ad campaign in Miami last year to support a $400 million bond referendum for flood mitigation and is often credited for its success.

The coalition also lobbied for a new federal law that would allow military facilities to access federal funds for flooding infrastructure, which benefited Norfolk’s Navy base.