Flooding Lessons from NOLA, via Post&Courier 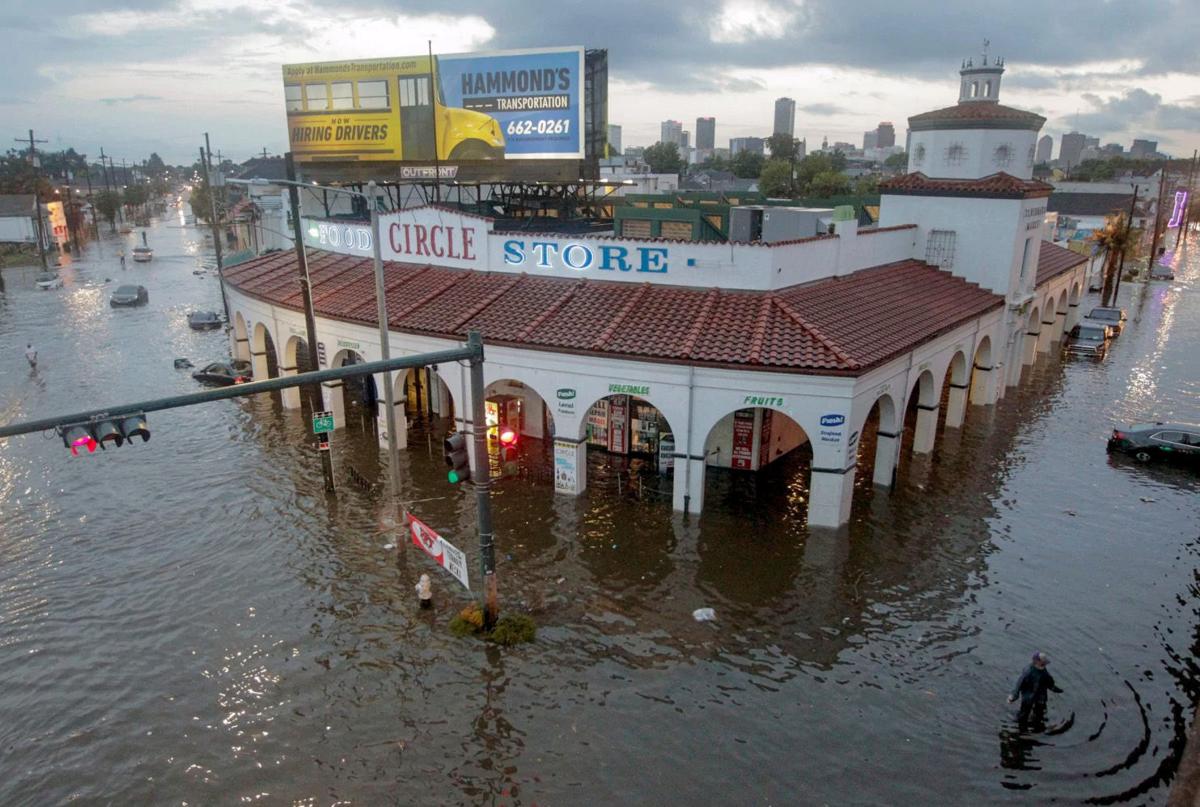 NEW ORLEANS — Surrounded by water, this old city is even lower than the Lowcountry. Half of its land is below sea level, and its soil is spongy. This is important because as New Orleans expanded and paved that soil, the sponge flattened. Wrung out, the city is sinking under the weight of its history.

At the same time, rising seas and intensifying storms have pushed the city’s levees and 120 drainage pumps to the brink and sometimes over it. Last August, a relatively normal summer deluge caused massive flooding, in part because some pumps weren’t working properly.

All this creates an urban cocktail of impending doom and end-of-time revelry. Raised tombs in cemeteries remind you that the ground is too low to bury someone in perpetuity. Roller-coaster streets and water main breaks remind you of the land’s subsidence. From the raucous French Quarter, you see ships on the Mississippi eerily above you.

Straddling a levee between denial and action, New Orleans also offers important lessons for other low places, including Charleston, which has seen three major floods in three years and faces an estimated $2 billion bill to protect the city in the future. So, on a warm December afternoon, Julia Kumari Drapkin, founder of I See Change, showed off some of New Orleans’ new efforts to adapt.

For much of its history, the city treated water as an enemy, said Drapkin, whose New Orleans group studies effects of climate change on cities. The city survived by adding defenses — building levees and pumping water from catch basins into canals and lakes Pontchartrain and Borgne. This system lifts as much as 400,000 gallons a second. The pumps run even when the weather is dry, collecting unseen runoff. But a rapidly changing climate means the city can no longer pump its way out of trouble, she and others say.

Last August’s rain bomb, which created thigh-deep flooding in some areas, was an example. “The system would need to be six times bigger to handle an event like that,” Drapkin said.

So instead of focusing primarily on pumps, city planners are looking at building “green infrastructure,” a network of projects to store water — and perhaps even let some of it seep back into that flattening sponge.

One prominent project is the site of a former convent. Katrina flooded it in 2005. A few years later, lighting struck, triggering a fire. The Sisters of St. Joseph decided enough was enough and donated their 25 acres to the city. Now, planners have begun developing the Mirabeau Water Garden, a park that will double as a holding pond during severe storms.

“The 10-year storm events are happening 1 to 5 times a year now,” said Maria Papacharalambous of Waggoner and Ball Architects, which helped develop the plan. The convent is gone now, leaving behind a sidewalk in the shape of a cross and a field of live oaks and diverse grasses. Plans call for gentle ditches that turn into temporary ponds during storms. When drier weather returns, they revert to fields and swales.

Planners estimate the storm garden could remove 10 million gallons of drenching rains from more 3,000 acres around it. So far, federal grants have paid $12.5 million for the park, about half its expected cost.

The Mirabeau Water Garden is one of the more ambitious living-with-water elements in the city’s menu. Another, smaller project is nearby and not far from a levee that failed after Hurricane Katrina. That levee break left the city in tatters. Many neighborhoods still have vacant lots, including two in the Gentilly Resilience District that became a small rain garden.

Colleen McHugh of the city’s Office of Resilience and Sustainability, said the park-like plot can capture about 88,000 gallons from nearby streets. It holds it for a short period in a donut-shaped pond until the pumps kick in. It’s small, but tied into a network of similar projects, it can buy the city’s beleaguered pumps more time.

Across the arrow-straight causeway over Lake Pontchartrain is the small city of Mandeville. Near the town’s seawall, Roderick Scott dismisses some of New Orleans’ climate change strategies with a shrug. “It’s a drop in the bucket of what needs to be done,” he said.

Scott was a contractor in Iowa when severe floods hit parts of the Midwest in 2008. Sensing a business opportunity, he shifted his business toward rebuilding flood-prone historic structures. He eventually moved to New Orleans to help start a company that specialized in elevating buildings. That company ultimately raised more than 1,500 homes and businesses in Louisiana, he said. He’s since become a sought-after flood mitigation specialist, and he recently visited flood-weary Charleston to talk to preservationists about dos and don’ts of raising old homes.

So your options in these cities are limited, he said. “There are basically three forms of mitigation: elevation, relocation and demolition.” He falls squarely on the side of elevation.

Mandeville’s historic district is on the edge of Lake Pontchartrain, which because it’s open to the Gulf of Mexico, is at sea level. When southwest winds blow hard, waves pile onto each other and crash over the wall. Same with hurricane storm surges. Mandeville doesn’t pump water like New Orleans. Instead, as with some areas of Charleston, Mandeville’s drainage system depends on gravity and time.

Like Charleston, this low-lying area floods often. He pointed to the old Don’z bar across from the seawall. It once housed a Civil War hospital on the second floor. The bar is on the ground floor, and inside, a patron named Bobby Boettner said he’s seen floodwaters rise to the level of the barstool. “I stayed right here. I had a cooler floating next to me,” Boettner said.

Scott said ground-floor structures such as Don’z are vulnerable to more than rising waters.

“Climate change isn’t the problem at the moment. It’s flood insurance,” he said.

Homes that aren’t raised high enough to meet federal flood insurance guidelines are seeing dramatic rate hikes. More increases are likely on the way as the National Flood Insurance Program tries to right its balance sheet. A small ground-floor business like Don’z could end up with an annual bill of $45,000 in seven years, Scott said. “It’s going to price people out of older buildings.”

He’s already seen effects on the real estate market in Mandeville and other low-lying areas of Louisiana. Homes that are raised usually sell quickly and at escalating prices. “But the ones on the ground — you can’t sell them, or they go minus the cost of elevating them.”

So far, Mandeville has raised about 400 structures in vulnerable flood zones with about 100 to go, Scott said. Residents in non-elevated homes several years ago formed a group that demanded lower property taxes based on the lower resale values. “They got the reduction, and this reduced tax revenue affects the entire city, schools, the city’s budget.”

Early on, Mandeville had few guidelines about raising homes, even historic ones. And this led to some aesthetic mistakes.

Because many homes are raised so high, the city resembles a beach town. Some homeowners raised their homes with metal pipes used in the oil industry, which makes them look as if they were built on playground equipment.

Others raised homes on unfinished concrete blocks, exposing the insulation and plumbing, like a person without pants.

One of the city’s advocates of such features is Scott’s wife, Louisette, who also is Mandeville’s director of planning.

She said one of the biggest lessons Mandeville learned was to get architects and engineers involved early in the elevation process.

“I can’t stress enough that every house needs to be done on a case-by-case basis, especially in a historic neighborhood,” she said. If that doesn’t happen, residents end up with homes that lack proper entrances or lack natural connections to streets and sidewalks.

Designs aside, inaction isn’t an option. Scott estimates that 3 million homes across the nation are candidates for elevation, relocation or demolition because of rising seas and other factors related to climate change. Mayors and councils and planning officials that fail to protect their constituents’ homes from flooding will lose their jobs.

“Charleston, Mandeville and Miami – these cities have two mortgages before seas rise,” Scott said. “We’ve got to fix it now for our children.”

Back in New Orleans, more than 23,000 scientists gathered for the American Geophysical Union’s fall conference, the world’s largest gathering of Earth and space scientists. The planet’s rapidly changing climate was a prominent theme.

One group of federal scientists said the Arctic was “going through the most unprecedented transition in human history.”

Another research team reported that rain from Hurricane Harvey was 15 percent higher because of human-caused global warming.

A third team of scientists said that three extreme weather events in 2016 — a massive blob of warm water off Alaska, heat waves in Asia and high overall temperatures elsewhere — were linked to burning of fossil fuels and other human sources.

Outside the mile-long convention center, mostly out of view, was a levee that protects the city below from the Mississippi above — a quiet reminder that city’s struggle against high water is as real and precarious as a man-made berm.

Tony Bartelme is senior projects reporter for The Post and Courier. He has earned national honors from the Nieman, Scripps and National Press foundations and is a three-time finalist for the Pulitzer Prize. Reach him at 843-937-5554 and @tbartelme