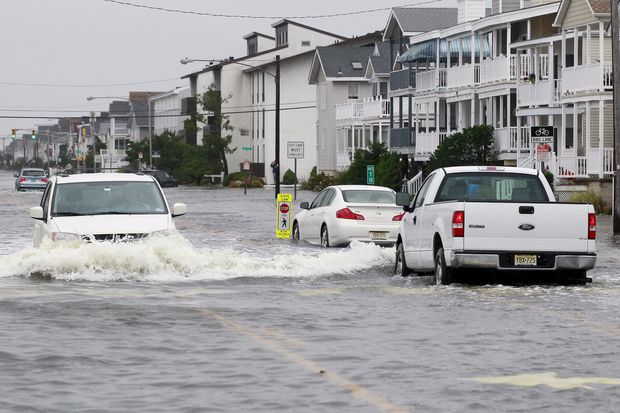 Flooding has erased nearly $7 billion in value for homeowners in New York, New Jersey and Connecticut since 2005, a new study finds.

Researchers across the country are studying the impact of water levels on real-estate values. A growing body of research has highlighted the vulnerability of Miami-Dade County, parts of which sit just a foot above sea level, to slowing home-price appreciation because of increased flooding.

The researchers previously found that a total of $7.4 billion in potential home value appreciation had been lost across five southeastern states: Florida, Georgia, South Carolina, North Carolina and Virginia. The newly published research expands the analysis to include the tri-state area, bringing the total loss for all eight states to $14.1 billion.

The Northeast tri-state communities—home to some of the most valuable real estate in the U.S.—have lost nearly as much property value as storm-drenched southern Florida, according to an August report from First Street Foundation, a nonprofit that says it advocates “for sea level rise solutions.” This is in part because real-estate prices in the region are high relative to the rest of the country, the report’s authors said in an interview.

The state of New Jersey overall has lost $4.5 billion in potential value from 2005 until 2017 compared with Florida’s loss of $5.42 billion, according to the research. New York has lost $1.3 billion and Connecticut lost $916 million.

First Street Foundation used the same methodology for its research as a previous paper about the effect of flooding on the Miami-Dade market, written by Steven McAlpine, head of data science at the First Street Foundation, and Jeremy Porter, an environmental health sciences professor at Columbia. That peer-reviewed report, which was published in June in the Population Research and Policy Review journal, showed $465 million was lost in Miami-Dade County.

Jesse Keenan, a professor at Harvard University who wrote a different peer-reviewed study on the effect of flooding on Miami housing and isn’t involved in the First Street Foundation work, said the methodology is in line with academic research standards.

Ocean City, N.J., surpasses Miami Beach as the city hardest hit in the eight states they have studied so far by increased flooding, the report said. The Jersey Shore community of about 12,000 residents lost more than $530 million of potential real-estate value from 2005 to 2017 because properties appreciated more slowly than they would have without the risk of flooding, the study concludes. Miami Beach lost $337 million of potential value during the same period.

That said, values still grew during the last decade in many areas covered in the report, even if they lagged behind relative to some other locations. Resiliency measures such as elevating homes and building sea walls can help guard against many of the risks, say developers and some local officials.

Doug Bergen, a spokesman for Ocean City, said the assessed value of all real estate in Ocean City has risen substantially since 2005 to about $11.7 billion. Replenished beaches and a dune system protect the city’s entire oceanfront, while homes are now required to be elevated. The city also has a $100 million capital plan to elevate streets, and upgrade drainage systems and pumping stations. He called the report’s findings for Ocean City “implausible.”

Top 20 cities by total property value lost due to sea-level rise and flooding, 2005-17

In the First Street report, researchers examined 9.2 million real-estate transactions across eight coastal states, and extrapolated to get the value of 20 million properties. They compared homes at higher elevations against those closer to sea level, or with roads that are vulnerable to flooding.

Researchers also controlled for the 2008 housing crash and for the direct impact of catastrophic weather events such as superstorm Sandy, which damaged about 200,000 homes from New Jersey to eastern Long Island. Areas that were worst hit by the October 2012 storm are many of the same places that experience frequent minor flooding.

Researchers at the University of Colorado at Boulder and Pennsylvania State University found similar results across the U.S., where homes near rising sea levels now sell at a 7% discount compared with similar but less-exposed properties.