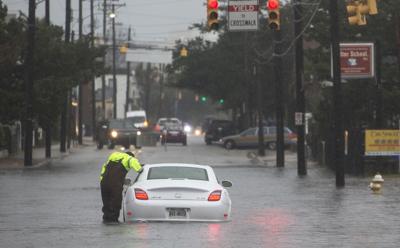 Charleston Mayor John Tecklenburg announced during last year’s annual State of the City address that fixing flooding would be the city’s top policy priority of 2018.

On Tuesday, the mayor changed the typical format of the annual speech to give a full progress report on that effort, giving a detailed presentation of all the projects, studies and policy changes the city is pursuing to address the growing threat of sea level rise and climate change.

With a slideshow as his backdrop, Tecklenburg recapped the problem and the city’s strategy so far.

He said the city’s flooding issues date back to Colonial times, when early settlers filled in and built on top of creek beds on the peninsula, disrupting the natural flow of water. These areas, such as Market Street, have kept flooding ever since.

Plus, while the first underground drainage network was installed in the mid-1800′s, it hasn’t expanded to keep up with the peninsula’s growth.

“Over time, the city developed into this grid of undersized and insufficient pipes and flooding features that don’t meet today’s requirements,” he said.

As the city expanded into areas such as West Ashley and James Island over the past half century, suburban developments were often built without proper drainage infrastructure.

Now, after repeated historic floods over the past several years and an expected sea level rise of 2-3 feet in the future, the city is expediting plans to fix the old infrastructure and make sure new problems aren’t inadvertently created with new developments, the mayor said.

He laid out a strategy with five general approaches: setting policies to protect people from flood risks, making land use decisions with flooding in mind, adding more resources to address the costly and complex drainage issues, improving infrastructure and further engaging the public to help tackle the challenges.

So far, 14 major drainage studies, master plans or infrastructure projects are underway throughout the city.

Last year, the mayor and top city officials spent a week in the Netherlands seeking the country’s world-renowned guidance on how to better control flooding. Now, the city is participating in the Dutch Dialogues program with those experts to bring some of that expertise to Charleston.

The Army Corps of Engineers also recently began a $3 million study of the flood risks on the Charleston peninsula, an effort that eventually could bring federal dollars for major infrastructure projects, such as a seawall. The city and the county have partnered on other drainage studies in West Ashley and on James Island.

City Council also approved the mayor’s request late last year to create a new stormwater department that will focus solely on flooding. Tecklenburg said he expected to hire a department director by the end of February.

The department will eventually be tasked with enforcing stricter stormwater standards that developers will have to abide by. He said he expects the new rules to be presented to City Council this summer.

Stricter rules have already been enacted in the Church Creek drainage basin in outer West Ashley. The study of that area wrapped up last year and revealed that $44 million worth of infrastructure was needed to fix the decades-long flooding problems there. The city and Charleston County agreed to put some property taxes aside over the next 20 years to pay for them.

The new development rules could serve as a model for the citywide regulations, at least temporarily.

After the mayor’s speech, City Council debated a proposed moratorium on new developments in flood zones on James and Johns islands. Councilwoman Carol Jackson, who brought the ordinance forward, said the idea was to make sure new developments weren’t built under outdated stormwater requirements.

While most council members said they wouldn’t support the moratorium, they voted to keep considering one of its key features — a set of interim stormwater rules developers would have to follow until the new stormwater design standards manual was finalized.

The proposed set of interim rules were exactly the same as those passed in Church Creek, which include a requirement that if developers use fill, they have to dig and leave holes on the land so it doesn’t lose its overall capacity to hold water. They also will have to use certain materials so water can soak into the soil.

“The goal for this whole process was to have better protections,” Jackson said. “If we can do it by enacting interim standards, I’m all for it.”

The proposal will now be sent to the Public Works Committee for evaluation.