After another rainy day flooded streets on Friday, residents of Johns Island, James Island and the peninsula sent a letter to state and federal authorities alleging the city of Charleston has consistently failed to protect people and properties from known flood risks.

They argue the city should be investigated for allegedly violating floodplain standards and should ultimately be penalized through the National Flood Insurance Program. If they get their way, residents could face higher flood insurance bills. 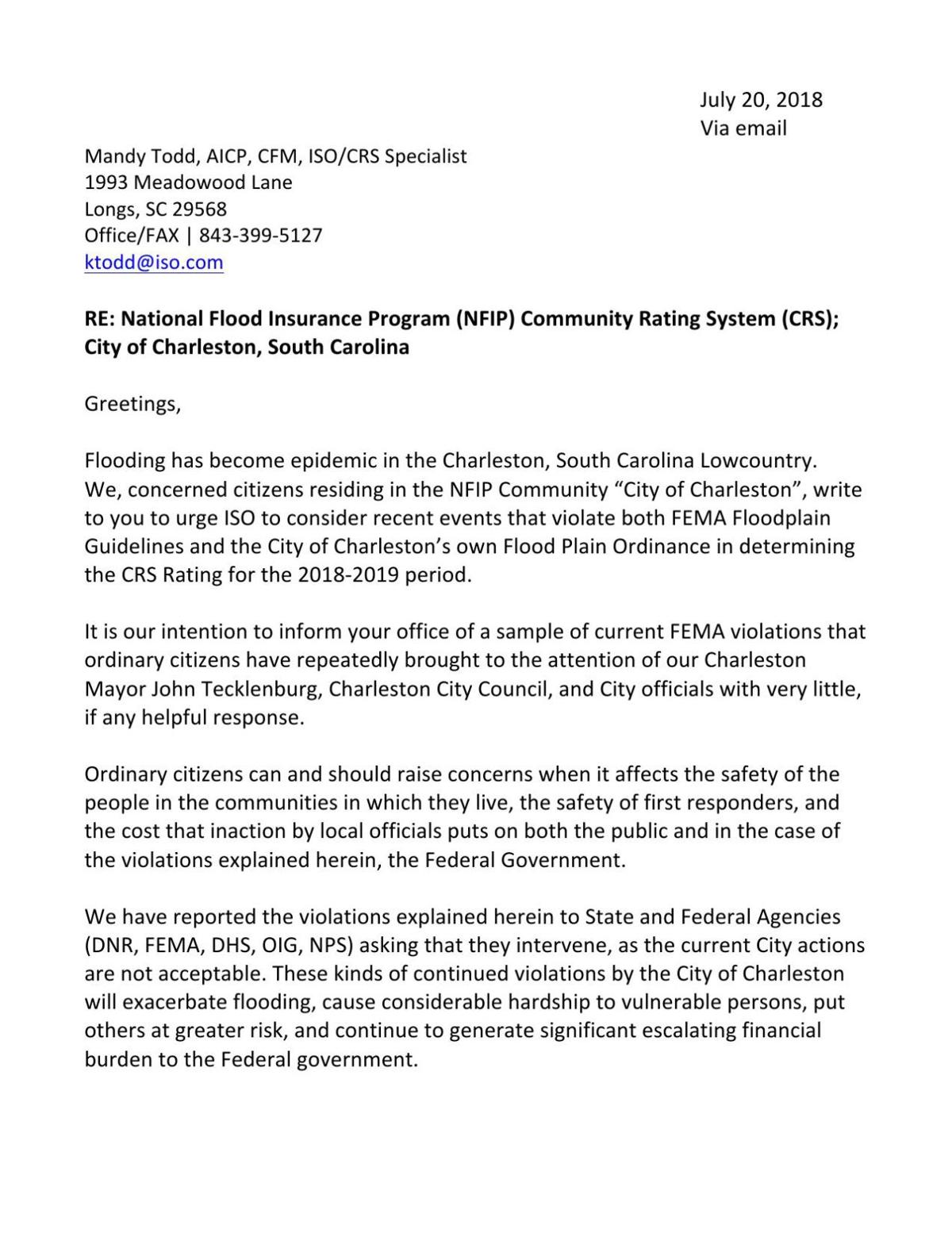 Through a variety of examples, they make the case that Charleston has allowed homes to be built at lower elevations than what the Federal Emergency Management Agency requires and that the city hasn’t taken the necessary steps to correct the errors. They also argue that in areas of new development, such as on Johns Island, flood risks are not being considered enough when determining where homes should be built.

The letter is addressed to officials with FEMA, the NFIP and the S.C. Department of Natural Resources, which are all involved with setting floodplain management standards and ensuring communities are following them. The NFIP determines which areas have flooding risks, and in order to insure homes that are built there, communities have to comply with minimum building standards set by the program.

Communities that go beyond the minimum standards can participate in the Community Rating System to get a discount for residents purchasing flood insurance. Charleston, for instance, has a rating of 6 out of 10 and translates to residents getting a 20 percent discount on flood insurance, amounting to about $200 per home every year. Communities with lower ratings are rewarded with larger discounts.

In the letter, the residents ask authorities to re-evaluate Charleston’s rating and possibly suspend the city’s ability to participate in the NFIP.

DNR Floodplain Manager Maria Cox Lamm explained in May that if a community is not following the NFIP’s minimum standards it can be placed on probation, which means a $50 charge is tacked to everybody’s flood insurance bills until the violations are corrected.

If a community doesn’t remedy its issues it can be suspended from selling federally backed flood insurance.

“Maintaining the current CRS rating of 6 or holding the City of Charleston in good standing despite NFIP non-compliance issues facing this city (and often caused by the city) is inconsistent with the goals of reducing flood risk,” the letter states.

City spokesman Jack O’Toole said he thinks the city’s rating is likely to improve, if anything, because of the ongoing efforts to address flooding. He said the city hired its first floodplain manager this year and a contractor is working to rewrite the stormwater regulations.

“As the mayor has made clear, flooding is the top priority of our city government today. That’s why every city department is now working to help solve the problems of flooding, drainage and resilience — problems that have been, in many cases, literally hundreds of years in the making,” he said.

Past and present mistakes

When homes are built in the 100-year floodplain — areas deemed to have at least a 1 percent chance of flooding in a given year — they have to be elevated above the level where FEMA expects water to rise in a major flood. That’s called the base flood elevation.

Dustan, Zimmerman and Bernier allege the city has knowingly allowed some homes to be built below the base flood elevation, which is why they now routinely flood.

One example they give is the Willow Walk subdivision constructed in the 1980s near Folly and Fort Johnson roads on James Island. Zimmerman still owns one of these routinely flooded properties but has moved into another house on higher ground nearby to escape the rising water and rampant mold.

She’s been trying for months to get the city’s help with the ongoing flooding problems which, as an immunologist, she knows are a health risk because of the mold. Many people are still living there.

In the letter, she and the other authors claim the city allowed the Willow Walk homes to be built several feet below the required elevation without following a legitimate variance procedure and then approved them for occupancy. Not only did it put people in substandard conditions for decades, they say the city violated FEMA standards.

That noncompliance means FEMA can’t pay what residents need to repair the homes and bring them up to code.

They also said the deeds for the properties say they’re in a low-risk flood zone, which is incorrect and means people can sell the homes without disclosing the full scope of the risk.

Zimmerman said she decided to take the situation to federal authorities because the city hasn’t offered any meaningful solutions.

“People in the communities in which we live are being harmed. I don’t want to be a bystander. I can’t fix this. What I have witnessed is complete and utter despair in vulnerable people and that’s not OK,” she said last week.

Dustan, for his part, has also been to many city meetings over the past few months to state the case for better development rules on Johns Island. He lives in the Stono Pointe neighborhood off of River Road and served on the Johns Island Growth Management Committee in 2007 to share his insight on the unique topography of Johns Island.

His recommendation to build homes no lower than 14 feet above sea level haven’t been followed, despite the fact that it was adopted in the formal Growth Management Plan to guide developments on the island. He’s also raised concerns that the practice of clearing forests and layering on fill dirt for subdivisions is harming the environment’s natural ability to absorb water.

The letter reiterates many of these points and alleges the city is violating its own ordinance, which states, “subdivision proposals shall be consistent with the need to minimize flood damage.”

He said he felt his pleas to the city have been ignored and that the recently reconvened Growth Management Committee “is a farce.”

“One of the reasons for going to the feds with this letter is that we have gotten zero satisfaction or response from the city,” Dustan said. “Regardless of what they do and say, the destruction continues.”

The letter also alleges the city has not followed FEMA requirements to elevate homes in the Historic District in downtown Charleston, but historic homes are exempt from most elevation standards.

A guiding principle of the NFIP when it was created in 1968 was to steer development away from the highest-risk areas. The city has said its policies are consistent with that goal.

“While the City does not outright prohibit development in flood-prone areas, the Building Code, Zoning Ordinance, City Code, and Stormwater Design Standards Manual consider the probability of flood damage and … all development is required to meet the current standards under these adopted documents,” Public Service Director Laura Cabiness said in a written statement in May.

Underestimating the flood risks can be costly.

The majority of the property values in the city today, nearly $7 billion, are found in high-risk flood zones, according to Charleston County’s Hazard Mitigation Plan.

Last year, all municipalities in Charleston County reported a combined 354 properties that had been damaged over and over again by flooding. After Tropical Storm Irma’s damages were tallied at the end of February, the city alone had reached 754 repetitively damaged properties.

It’s also true that the city has more permissive floodplain standards than other coastal communities, such as Savannah.

Danon Lucas, regional FEMA spokesman, didn’t say what exactly the process is when residents raise these types of concerns. Local governments are responsible for creating and enforcing their own ordinances. He said FEMA and SCDNR routinely review local policies to make sure they comply with NFIP standards.

Charleston is scheduled for its check-up next month, he said.

With more frequent storms on the horizon and a National Flood Insurance Program about $25 billion in debt, the people who wrote to the federal authorities argue that taxpayers can’t afford to keep bailing out homes that the city shouldn’t have permitted.