NEW ORLEANS — Burnell Cotlon lost everything in Hurricane Katrina — “just like everyone else,” he said.

When the flawed flood wall bordering his neighborhood here in the Lower Ninth Ward gave way in August 2005, the waters burst through with explosive force that pushed his home off its foundations and down the street. What was left: rubble, mud and mold.

Not far from his rebuilt home stands a rebuilt flood wall, taller and more solidly anchored in its levee than the old one. On the other side of that lies the canal whose storm-swollen waters toppled the old wall, letting Lake Pontchartrain spill into the neighborhood and then sit, more than 10 feet deep, for weeks on end. As an added shield, an enormous gate closes the canal off from the lake when storms approach. Similar gates can secure the city’s other major canals. In all, federal, state and local governments spent more than $20 billion on the 350 miles of levees, flood walls, gates and pumps that now encircle greater New Orleans.

“I hope and pray that the money was well spent and it is a decent system,” said Mr. Cotlon, who opened the first grocery store in the still-recovering neighborhood in 2014.

This year, New Orleans celebrates its 300th birthday. Whether it will see 400 is no sure thing.

As Jean Lafitte and other vulnerable little towns that fringe the bayous plead for some small measure of salvation, New Orleans today is a fortress city, equipped with the best environmental protection it has ever had — probably the strongest, in fact, that any American city has ever had. Yet even the system’s creators have conceded that it may not be strong enough.

The problem, in the argot of flood protection, is that the Army Corps of Engineers designed the new system to protect against the storms that would cause a “100-year” flood — a flood with a 1 percent chance of occurring in any given year. And that, experts say, is simply insufficient for an urban area certain to face more powerful storms.

Federal, state and local governments have spent more than $20 billion on levees, flood walls, gates and pumps in greater New Orleans since Hurricane Katrina in 2005. But much of the city sits below sea level, making it vulnerable if infrastructure were to fail. 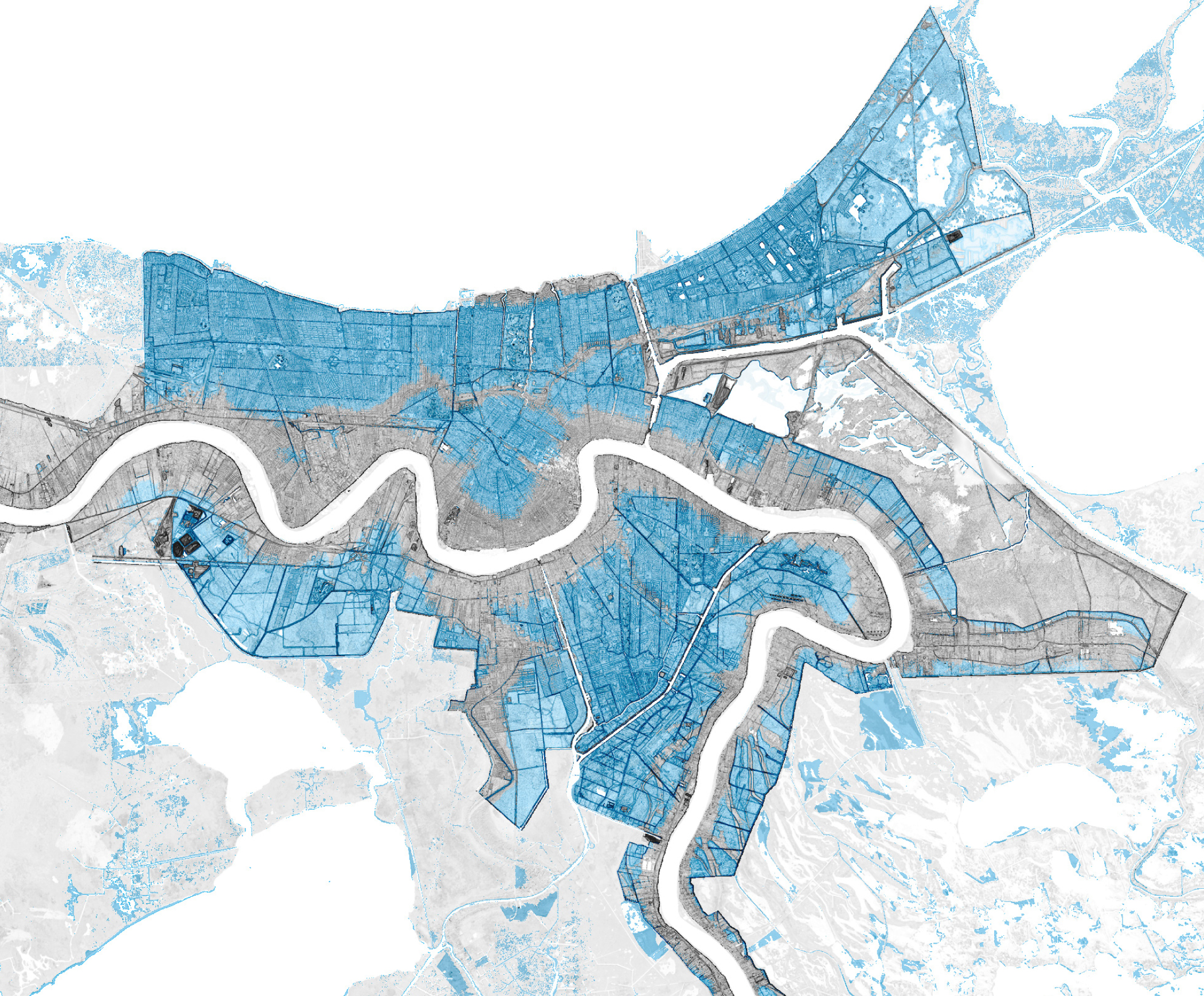 “All along we knew that 100-year was somewhat voodoo math,” said Garret Graves, a Republican congressman from Louisiana and former chairman of the state’s Coastal Protection and Restoration Authority. Indeed, the corps has stopped calling its handiwork a hurricane protection system, opting instead for the more modest Hurricane & Storm Damage Ruction System.

How that came to be is a story of money and politics and, perhaps, a degree of Louisiana fatalism. In simplest terms, though, it comes down to a mismatch between limited resources and limitless amounts of water.

If New Orleans is culturally and culinarily unique among American cities, it is also uniquely vulnerable: Half the city lies below sea level, and is sinking still, and the buffer of protective wetlands that can knock down the force of incoming hurricanes is eroding away.

Climate change threatens to make these problems far worse. The rising oceans will strengthen storm surges, and increased moisture in the atmosphere will add to the drenching rains that regularly overwhelm the city’s aging drainage system. Scientists also suggest that a warming world will bring stronger hurricanes.

The corps itself has repeatedly acknowledged that the new system will not prevent future floods. “There’s still going to be a lot of people that will be inundated,” the corps’s former commander, the retired Lt. Gen. Robert L. Van Antwerp, warned as far back as 2009. In storms at 200- to 500-year levels, the corps has said, New Orleans could still suffer breaches like those experienced during Katrina.

As he ends his eight-year run at City Hall, the mayor, Mitch Landrieu, sounds as if he has a bit of the prophet about him. The combination of sea level rise, subsidence and coastal erosion, he said in an interview, poses an “existential threat” for New Orleans.

“What we should have done,” Mr. Landrieu said, “is build to a 10,000-year flood standard, which is what the Netherlands built to, and we didn’t, and that was for the country a monetary decision.”

Now, he fears, his city itself could join a variety of landmarks that, as a popular local song puts it, “ain’t dere no more.”

The Army Corps spent nearly 50 years building the old hurricane protection system for New Orleans. More than 1,400 people died in the city when it failed. So in the aftermath of Katrina, Congress thought big.

Funding measures that passed beginning in late 2005 outlined a three-stage program for restoring a shattered and sodden New Orleans. The first step was to repair the broken levees and flood walls to what they were before the storm. At the same time, the corps would develop a plan to offer “interim protection,” that 100-year level, achievable within several years. Finally, Congress called on the secretary of the Army, who oversees the corps, to “consider providing protection for a storm surge equivalent to a Category 5 hurricane — a storm, that is, more powerful than Katrina.”

A range of experts consulted by the corps called for defense of that level or higher. Indeed, a study by Dutch engineers found that central New Orleans needed protection against the kind of storm that might show up once in 5,000 years.

In the end, though, the interim level became the benchmark. One central factor was a congressional compromise reached during the George W. Bush administration that came to be known locally as the Devil’s bargain. Under the deal, New Orleanians would remain eligible for federal flood insurance if the system could be brought up to the 100-year level — the protection needed for insurance eligibility in what the government defines as a flood zone. An insurance standard became a proxy for a safety standard.

Though the corps produced a 4,000-page report with a host of alternatives, it offered no recommended course of action. That, along with the financing, largely fell to the state. By 2012, the state’s Coastal Protection and Restoration Authority had already issued two versions of its own master plan, the later one calling for Katrina-level or greater protection for New Orleans. But when the third plan was released in 2017, predictions for the effects of climate change had outstripped ambition: The seas were rising so fast, the authors concluded, that with its $50 billion price tag for greater New Orleans and the south Louisiana coast, the hoped-for protection was out of reach. What’s more, that much money might never become available.

Sidney Coffee, who led the state authority from 2005 to 2008, said the state had to balance the needs of the city with those of the rest of Louisiana. “The state has always wanted the best, the highest level of protection that could be afforded for New Orleans,” she said.

Knowing that the new flood walls and earthen levees weren’t high enough to stop a Katrina-like surge, the corps built in features intended to keep them standing, including erosion-fighting measures like concrete “splash pads” to prevent overflow from washing away supporting soil. Deeper pilings will help the walls stay upright. Gates to keep Lake Pontchartrain from pouring in should mean less water to pump out after a storm.

Because of measures like these, “what resulted from the design was much more like a 500-year system than a 100-year system,” said Ed Link, an engineering professor at the University of Maryland who led the corps-sponsored investigation of the levee failures in Katrina. With an emphasis on improving evacuation protocols, even supplying transportation for pets, fewer deaths are expected during the next Katrina.

But the flooding could still be severe — during a 500-year flood, as much as five feet deep in the half of the city that sits below sea level. In August, a thunderstorm dumped between six and nine inches of rain over parts of the city within a three-hour period, overwhelming antiquated pumps — some dating to 1912 — and causing extensive flooding. Updating the drainage system will cost at least $1 billion through 2026, and perhaps much more.

One of the most spectacular features of the city’s new defenses is a 1.8-mile-long wall that cuts across wetlands at a corner of Lake Borgne, east of the city. It stands 26 feet above the water line and cost $1.1 billion. Its support piles reach more than 100 feet into the muck of the lake. Its top is crenelated like a castle wall.

And it illustrates how, in many parts of New Orleans, upgrading further is not feasible.

The wall was designed for a 100-year storm, with some extra height to compensate for subsidence and estimated sea level rise over 50 years. But at this location, Katrina sent a far stronger surge.

There is no easy fix. While earthen levees can be raised by adding dirt, raising the wall even higher would be impractical, said Robert Turner, director of engineering and operations for the regional levee authority that operates the barrier. A cap of an additional foot could be built, he said, but “if you try to go higher than that over time, you can stress the pile foundations that hold this barrier in place.”

To many local officials, 500-year protection is a fantasy. Susan Maclay, the head of the levee authority for the New Orleans-area communities on the west bank of the Mississippi River, said that finding the money to maintain the current system was daunting. The financially squeezed state government, too, is searching for a way to pay its share of the hurricane protection system — $100 million a year for the next 30.

“You’re so focused on killing the snakes right in front of you that you can’t, it’s just not feasible, to think beyond the immediate problem,” Ms. Maclay said.

All the while, the rest of the state is waiting for its own 100-year protection.

“It’s difficult to sell, on the state level, elevating New Orleans protection to 500 when you have places such as Jean Lafitte, Terrebonne Parish, Houma, New Iberia and other places that have zero level of protection, or at best 10-year protection,” said Jerome Zeringue, a state representative. New Orleanians, he said, “should lessen their expectations.”

The rest of the nation, too, awaits a higher level of protection from the effects of climate change: Major cities like New York and Miami, but also smaller communities like Galveston, Tex., want costly projects of their own. “The rest of the coast, and the rest of the country, needs help,” said Col. Michael Clancy, commander of the New Orleans district of the corps.

Still, more must be done, said Mr. Graves, the Louisiana congressman. The projects to protect the state so far are tremendous, but what is to come will have to be “tremendouser,” he said, adding, “People say we can’t afford to do this — I would say we can’t afford not to.”

Repairing hurricane damage is always far more expensive than providing protection. Katrina cost between $120 billion and $150 billion, Mr. Graves noted. The new system has already saved hundreds of millions of dollars in smaller storms like Hurricane Isaac in 2012. “When a big one comes,” he said, “that project will pay off multiple times over.”

New Orleans residents like Artie Folse hope that is true. But Mr. Folse is also wary. His house near Lake Pontchartrain had to be rebuilt from the studs up after Katrina. If the next storm overwhelms the city’s defenses, he said, “I can’t do it again.”

Designed and produced by Danny DeBelius.