We are Groundswell!, Charleston County’s only grassroots community organization dedicated exclusively to combating the rising flooding that threatens our homes and our hometown – over and over again.

Our mission is two-fold: To demand that our city, county and state governments devote more resources – and now – to the rising waters that threaten the very existence of Charleston as we know it. And to serve as a clearinghouse of practical information and support to our members as they deal with the devastation and anxiety that undermines our lives.

Groundswell! Is rooted in the Charlestowne and Harleston Village neighborhoods in the southwest corner of the Peninsula. But because flood waters know no boundaries, we welcome members throughout Charleston. We welcome, too, other groups that share our concerns – whether neighborhood associations, businesses, churches or civic organizations.

If you are fighting flood waters, you are our friend. And we are yours. Together we need not be overwhelmed. Together we can meet this challenge.

Join us today. Reach us at: groundswellcharleston@gmail.com.

Addressing a January general meeting of Groundswell!, Mayor John Tecklenburg ranked flooding abatement and drainage mitigation the top priorities for his administration, and he mapped out a plan to take them on that was wide-ranging, albeit not entirely crystallized.

By all appearances, it was a fully engaged John Tecklenburg — determined, business and fact driven, and poised to defend the fragile shores of the City of Charleston. In attitude and purpose, he appeared far less the tentative politician who spoke just before Christmas to a small group of Groundswell! leaders.

In December, the mayor said flooding was one of three priorities most pivotal to the city’s future, along with traffic and housing. This week, he moved flooding to the top of his agenda and committed to view future city policy and decision-making through that lens. He conceded, however, that ideal or even optimal implementation of his plan lacked the necessary war chest, funding prospects still not set in stone. Yet “nothing is off the table,” the mayor told more than 135 Groundswell! members who overflowed Gage Hall on Jan. 11.
Also taking part in Groundswell!’s second general meeting were Mark Wilbert, newly full-time as the city’s chief resiliency officer, and Laura Cabiness, chief engineer. In the audience, and speaking briefly, were City Councilman Mike Seekings and County Councilman Dickie Schweers. Seekings promised a follow-up gathering within a month to review specific projects under way in his district. Schweers said county-wide backing, particularly for the Peninsula, could succeed only with grassroots activitism such as the Groundswell! movement. He called it significant and encouraging that the mayor is fully invested in the anti-flooding effort.

Mayor Tecklenburg spoke for nearly 90 minutes, describing mitigation work under way—more than $100 million in spending in the past year alone. He spoke of augmenting funding from tourism taxation (indeed, he asserted, all of Charleston is tourist-oriented) and of tapping corporate entities, such as Boeing, Volvo, and Mercedes. He also pointed out that Murrary Boulevard, which flanks the Low Battery wall, is a state highway eligible for State Infrastructure Bank support. Or so the mayor will propose.

He promised to enable Groundswell!’s website to publish a map of more than 100 flooding and drainage mitigation projects planned or completed.

But despite the invigorated Tecklenburg approach, three consecutive years of disastrous floods, and accumulating days of “nuisance flooding,” and despite record storm surges, the ruinous financial toll on homeowners, and another looming hurricane season, there remained an attitude of fiscal restraint in the mayor’s remarks. His continued insistence that the city must sink or swim within its means led some Groundswell! members to characterize him as aggressive, but not yet bold.

Wilbert, the resiliency chief, announced that he will soon head to Washington to solicit help from federal lobbyists to for flood-relief funds. He has also been in talks with a contractor about whether short-term abatement is feasible and affordable here. A Groundswell! member will accompany a site visit by the contractor to Charleston later this month.

Finally, the city is about to hire a flood-plain manager to act as an adviser to homeowners with severely, repetitively damaged properties who are coping with FEMA and BAR requirements, flood insurance details, and the complexities of raising their houses. 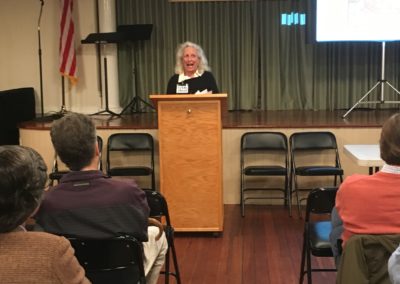 Susan Lyons calls the second general meeting of Groundswell! to order and introduces the mayor as featured speaker. 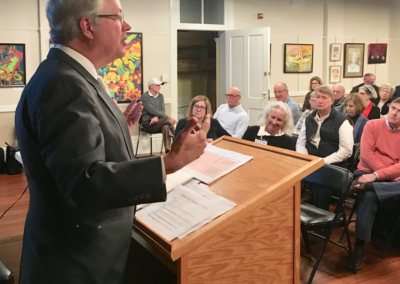 Speaking to Groundswell!’s second general meeting, the mayor lays out plans to combat the crisis in flooding and drainage on the Peninsula. 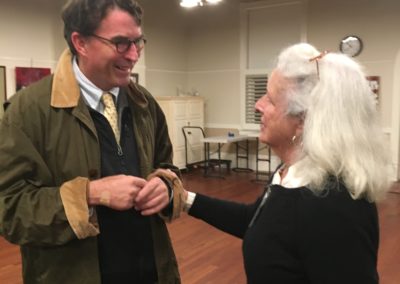 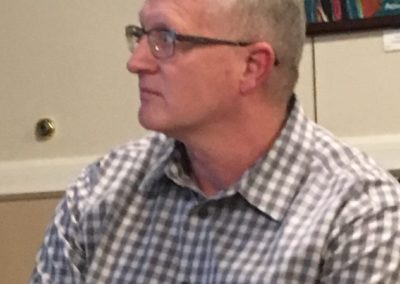 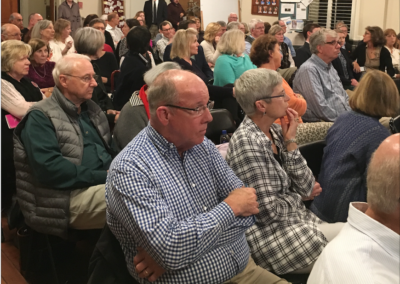 More than 135 Groundswell! members filled Gage Hall to hear the mayor and chief aides discuss plans to battle again flooding on the Peninsula. 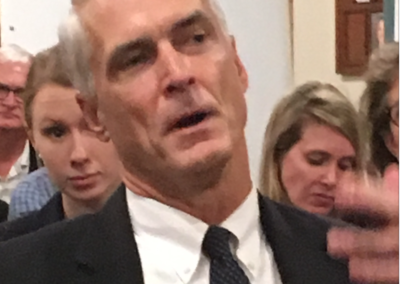 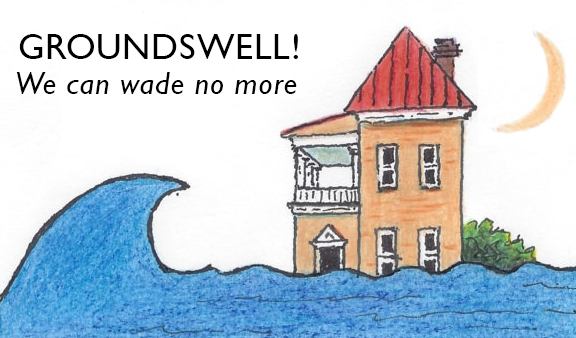 Now, after repeated historic floods over the past several years and an expected sea level rise of 2-3 feet in the future, the city is expediting plans to fix the old infrastructure and make sure new problems aren’t inadvertently created with new developments, the mayor said.

END_OF_DOCUMENT_TOKEN_TO_BE_REPLACED

“Our most pressing challenge remains flooding and drainage.” –John Techlenburg